Here is it; an opening, a space which cordially invites everything to co-exist, a primordial

sensible world. The pain of labour has been re-inscribed throughoutâ€¦ The tools that borrowed

from the body itself having the potential to break limits, and that in turn carry the corporal into

transcendence... Chora is conceived as an attempt at redemption by revisiting the basics of hand

and tools, back to foreground the footprints, a harking back to the identity.â€ 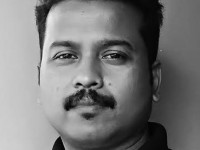 I ship my creations using reputed courier services only !

In case my creation appears to be damaged on delivery please reach out to me right away !