In my panting one can find distinct elements of semi-realism but without losing its realistic essence. I portray the formation of rock mountains cape in a very individualistic style. My work has evolved from form to formless. Itâ€™s all about raw nature. Textural type of painting which implies only fragrances of colors .Here only colors chemistry will work after blending in spectatorâ€™s eyes. 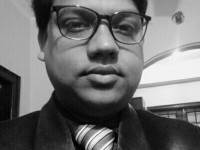 I ship my creations in a rolled format and send them across through reputed courier services only.

Your satisfaction is important to me. Please let me know in case of any concerns within 7 days of delivery and i'll be open to consider for refunds.
Please do not accept any consignment in case it appears to be damaged or broken.