White is pure and pure is white, white is made up of the whole spectrum yet it shows no color. Charanjeet Singhâ€™s experimentation with white on canvas assigns him the daunting task of dealing with the pure and the pristine. He laments- â€œwe are all so busy with colors, we hardly see white; if only the world, its politicians, and society could be genuine as white,having all colors yet clean and clear.â€ Gliding on this white surface are animals both wild and domesticated acting as main protagonists. They perform the role of messengers of Charanjeetâ€™s world-view, sometimesusing a microphone sometimes cascading on memorial statues or occasionally becoming household members. His love for animals is innate, as he owns pets and habitually finds himself talking to them either on streets or on the windowsill where the tiny birds playfully dance on the railings of his balcony. He has a penchant for the Hindi language, poetry in particular and believes that language carries a culture within it. â€œThe Indian traditions and customs are slowly disappearingâ€- he laments and wants to remind his onlookers that Hindi poetry has a lot to offer that has deeproots in our national psyche. 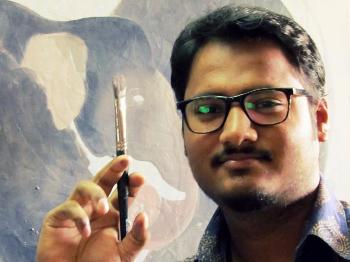