The Main Thrust of my paintings is form of human figure. I started of with realistic style of painting - Minute reproduction of reality through brush and colors. Eventually, I have adopted surrealistic form of art which evolved through my liking towards Gods and Goddesses.

My Latest work includes my dream world where there will be peaceful co-existence between all living beings - Man, animal and plants.
Customer satisfaction is my main goal. I will work with you to resolve any issue with the purchase. I will do anything in my power to make you a happy customer and maintain your loyalty, regardless of what the situation is. Every situation, return or exchange will be handled on individual basis.
The theme was Indian mythology paintings there created about peace and beauty of our God and Goddess. I felt our Indian mythology and our God and Goddess how their beautification of the ornaments, expression of body languages and imagination of divine composition. i love the beautification and beautification of human figure and mythological story which reflected always my paintings. 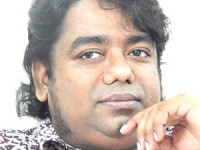 Artworks shall be properly packed, and shipped using reputed courier services. Please do not accept the shipment if it appears to be damaged/tampered with on arrival.