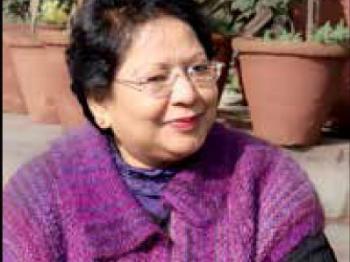 Born to artistic and literary minded parents, Kripal was exposed to various aspects of art since childhood. While her mother introduced her to classical music, painting and designing. Her father Prof. S.S. Mathur led her into the literary world by citing Shakespeare, Milton, Wordsworth, Shelly and Keats. He would eloquently read out dramatic lines from â€˜Hamletâ€™ and electrifying phrases from â€˜Macbethâ€™ & lyrical verses from Keats & Shelly. Her father was a professor of English Literature at the National Defence Academy, Pune.

Adding personal qualities like self-discipline, hard-work, honesty-in-action, determination and punctuality to this cultural amalgamation, she paved her way to the prestigious National Institute of Design, Ahmedabad, Gujarat, India to study Textile Design. At NID, immense global exposure helped develop a broad perspective to understand design. After completing her 3 Year Post Graduation in Textile Design, Kripal worked as a designer in the Industry for a few years. However, after a few years, a new walk of life beckoned her, and she chose to become a design educationist.

In 1993, she joined the prestigious National Institute of Fashion Technology, New Delhi. Here, she was given the opportunity to establish the first Textile Design Department in NIFT. Designing the curriculum for a three-year Post Graduation Course in Textile Design & Development, setting up the printing, weaving and computer laboratories, the admission process of the first batch of students was all done under her gifted guidance.

In 1996, Kripal had the opportunity to study at Central Saint Martinâ€™s College of Art and Design, London, for an Advanced Print Design Course. This helped broaden her outlook as a designer with strong Indian roots, to one with magnificent global appeal.

In 1999, she exhibited four creative textile wall carpets in the travelling exhibition on â€˜Contemporary Textile Art in Indiaâ€™, supported by the United States Educational Foundation in India & the British Council, New Delhi.

In 2002, Kripal showcased four appliquÃ© wall pieces in the 8th European Du Patchwork Exhibition, Alsace, France in September. The year also saw her design two collections of hand knotted carpets with Indian themes for the Indian carpet Industry. The project was sponsored by UNDP under the Development Commission (Handicrafts) Ministry of Textiles, Govt. of India.

Over the years, she has participated extensively in fairs, seminars and conferences such as Heimtextil Fair, Domotex and Interstoff World in Germany, Domotex International and The Design Week in London, Premiere Vision in Paris and Texstyles fairs in India.
Kripal has also guided multiple projects for UNESCO, Indian Airlines, trends research projects for Texstyles India and conducted workshops at NID.

She writes articles for many design and textile based publications and magazines; Apparel Online on a regular basis. She has also authored a chapter on Design Fundamentals and Printed Textiles for CBSE classes XI and XII.

In the 23 years of her illustrious career as a design educationist, Kripal has thoroughly enjoyed teaching courses like Elements of Design, Design Process, Print Design, Product Development and Creative Textiles in NIFT and NID. Teaching, according to her, helps evolve the designer within. With every new batch, students bring unique perspectives on art and design. Their young enthusiasm gives a rejuvenated spark to her design ideas.

She is currently writing a book on Designing Prints for Fashion & Home. It aims at being a useful reference book for aspiring textile designers in India and abroad.