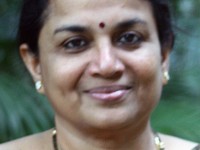 Hi, I am Asha Sudhaker Shenoy from Bangalore, and I was interested in art from my childhood days and had held exhibition of my art at the College where I studied, during my student days. I had done art works for the College magazines too. After retirement from service, I took to art again. A self taught artist, I have been been painting on canvas since 2007 and have participated in several Group Shows at Bangalore.I love to experiment in all mediums and do not like to restrict to a particular â€œstyleâ€ as I feel that is restraining the spirit of art.